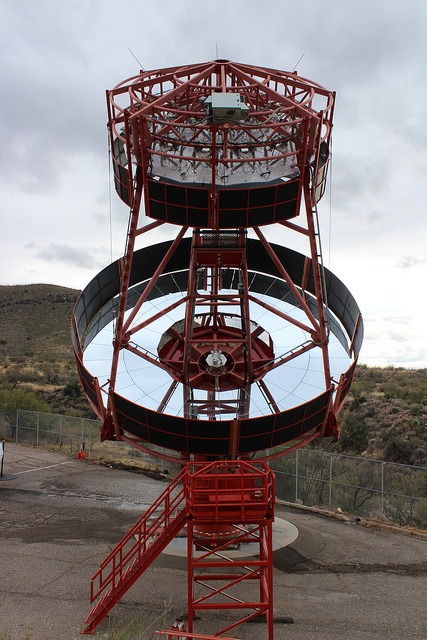 AMADO, Ariz. — On 17 January 2019, a prototype telescope proposed for the Cherenkov Telescope Array (CTA), the prototype Schwarzschild-Couder Telescope(pSCT) is being unveiled in a special inauguration event at the Center for Astrophysics | Harvard & Smithsonian, Fred Lawrence Whipple Observatory(FLWO) in Amado, Arizona. A dual-mirrored Medium-Sized Telescope, the SCT is proposed to cover the middle of CTA’s energy range (80 GeV – 50 TeV).

The pSCT camera readout is based upon the TARGET ASIC developed by faculty member Varner.   TARGET has been essential to meeting the performance, power and cost goals such that a large array of such telescopes is economically viable.

When fully deployed, the CTA Observatory (CTAO) will consist of 118 telescopes split between a southern array in Paranal, Chile and a northern array on the island of La Palma, Spain. Three classes of telescopes (Small-, Medium- and Large-Sized Telescopes) will be used to detect gamma rays in the energy range 20 GeV to 300 TeV with about ten times increased sensitivity compared to any current observatory. Notable for providing improved gamma-ray angular resolution and its very-high-resolution camera (>11,000 pixels), the SCT is proposed for the medium-sized CTA telescopes, which are considered to be the “workhorses” of the arrays with 15 planned for the north site and 25 for the south site.

More than 1,400 scientists and engineers from 31 countries are engaged in the scientific and technical development of CTA. The planning for the construction of the Observatory is managed by the CTAO gGmbH, which is governed by Shareholders and Associate Members from a growing number of countries. CTA will be the foremost global observatory for very high-energy gamma-ray astronomy over the next decade and beyond and will be the first ground-based gamma-ray astronomy observatory open to the world-wide astronomical and particle physics communities. The scientific potential of CTA is extremely broad: from understanding the role of relativistic cosmic particles to the search for dark matter. With its ability to cover an enormous range in photon energy from 20 GeV to 300 TeV, CTA will improve on all aspects of performance with respect to current instruments.

The full Press Release may be found here:

Scroll back to top
X
}